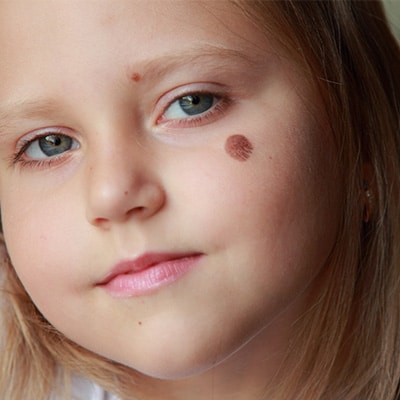 This may not be the exact look of your condition. Please confirm your diagnosis with your dermatologist.

A birthmark can be a generally harmless irregularity on the skin caused by overgrowth of blood vessels, cells that contain pigment, smooth muscle and fat cells. Birthmarks are usually unique and can be flat or raised, have regular or irregular borders, and have different shades of coloring. Birthmarks typically appear at or shortly after birth. The two main types of birthmarks are:

Pigmented birthmarks, such as moles, café-au-lait spots, and Mongolian spots, which are large, dark patches that may resemble a bruise and are caused by excess skin pigment cells.

A third type, congenital nevi (congenital moles) are defined as moles that are present at or shortly after birth. Not all moles are birthmarks.

Beyond their initial appearance, birthmarks show no symptoms. Most pose no physical health risk and many of them disappear or are greatly reduced in size and appearance over time. There are no known preventive measures for birthmarks. Birthmarks should be evaluated by a dermatology provider as rarely they can evolve into dangerous lesions, including skin cancer.

Could this be what you have?

Birthmarks may not develop for hours, days, or even weeks after birth. Though birthmarks can occur in male and female babies, and in any ethnicity, some subsets are more prone – if even slightly – to get birthmarks. These include:

Active observation – All birthmarks should be monitored closely, as some can develop complications including skin breakdown and bleeding or even evolve into cancer lesions. The proper diagnosis, surveillance and treatment would be recommended by a dermatology provider.